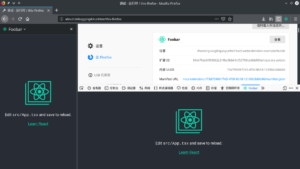 We will create a React app and turn it into a Firefox/Chrome extension.

What is the difference between web apps and browser extensions?

Browser extensions are also based on web technology, with several differences than regular web app.

It is hard to configure a React project from scratch. So many developers use create-react-app. It can also be used to create a WebExtension.

The command above creates a React app built with NPM and TypeScript. You can change those options as you want.

We already have the public/manifest.json file. It is for Progressive Web Application. Manifest file for WebExtension is a little bit different. We need to change it to the following format:

Create .env file at project root with the following content:

Add the following lines in public/manifest.json :

Build and test in browser

Run npm run build. The extension will be built in build folder.

After loading the extension, you could see a new icon in the browser toolbar. Click it, you should see a small popup showing.

Sidebar is more persistent than popup. If users need to interact with between web page and extension view very often, sidebar is a better choice.

Similar to popup, you need to add configuration to public/manifest.json :

Build the app again. Go to about:debugging and reload the extension. You should see a nice sidebar appear.

If your extension is for web development, developer tools is where you load the app. First, insert another line to public/manifest.json :

Build the app again. Go to about:debugging and reload the extension.

Press F12 and you should see a new tab "Foobar" in developer tools.

The full code is available on GitHub.